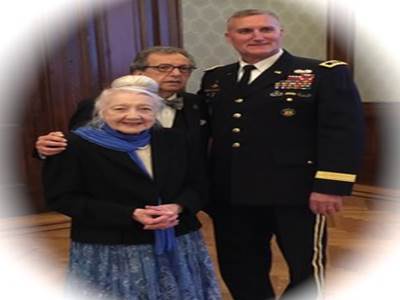 Congratulations to our client Applestick Media, and to the wonderful Alice Nugent for their exciting new project, The Alice Blue Gown!  On Veteran’s Day, November 11, 2016, the Armed Services Council of The Union League of Philadelphia Veteran’s Day Commemoration honored Major General William E. Ripp, the 50th Commandant of the US Army War College.  Additionally, the council presented an award to Alice Nugent in honor of her husband’s heroism during World War II.  Lt. Col. Owen J. Nugent loved his country and, even more so, loved Alice.  Lt. Col. Nugent was a war hero who commanded a B-17 (The Flying Fortress) during World War II.  He named the plane “The Alice Blue Gown” after the love of his life, and had her painted on the nose of the plane.  The plane flew a total of 28 missions, and while each mission risked the lives of all aboard, Lt. Col. Nugent knew that each mission completed placed him one step closer to returning home to marry the love of his life, Alice.  The talented team at Applestick Media, comprising of Scott P. Randolph, Fred Apple, Rick Lombardi, and Guy Quigley have captured the story of “The Alice Blue Gown” in a to-be-produced full-length, motion picture and/or documentary.  The film paints the picture of a true wartime love story, while tracing the historical significance of the B-17.  We are proud of our clients over at Applestick Media for their hard work, of Alice Nugent for her contribution to the film, and grateful for the sacrifice and courage of World War II veterans, and all those who serve.

Below is a link to an 8 minute video, providing a descriptive preview of the tale of “The Alice Blue Gown”: